While traveling I got used to losing things. You live out of your Backpack, in Dorms, with lots of other people. At least for me, it seems impossible to keep my stuff together and so I left quite a few things back on the way. But since you always meet twice in life, my dear Dr. Pepper Sweater, which got lost one night in Guatemala, used this paradox of traveling and found his way back to me after over 3 months later. 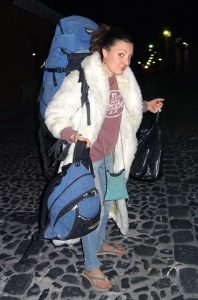 Lent at a cold night to a fellow traveler in need, passed on to another traveler by accident, I was sure I would never feel the comforting warmth of my dear sweater again. I even bought a new one in Guatemala. It felt wrong… But then, one bright day, two months after separation a picture popped up on my Facebook. Wait what?! Kylie who I met also in Guatemala has a Dr. Pepper sweater as well? Can`t be. A couple of messages later it was clear, it actually is my Sweater.
So I learned that the sweater washed up in the hostel she was working at and she picked it up because… well, it’s a Dr. Pepper Sweater, be honest to your self, you would have as well. What a lucky coincidence we had a brief chat in Guatemala about blogging and decided to exchange facebook. Next coincidence, we gonna be in Colombia around the same time?! Arrangements were made and finally we celebrated my reunion with my beloved Sweater in Medellin.
So now I have the pleasure to name a sweater my own, which saved a poor person in Guatemala from freezing and afterwards traveled 3000 km and crossed 5 borders to be with me again. I still can`t believe this happened as it did, but I guess more people have stories like this. Did you ever lose anything and got it back at an unexpected place and time? Let me know.